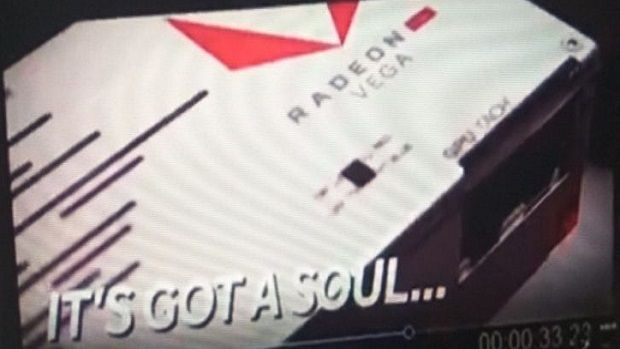 There is a lot of hype surrounding AMD Radeon RX Vega, especially ever since the official name has been confirmed at GDC 2017. Some people even go on to suggest that Nvidia has released the GTX 1080 Ti before Vega because of the competition that it has to offer but then again we have seen that Nvidia leads with their top tier GPU every year.

Here we are going to talk about new images of the AMD Radeon RX Vega, these are not very clear and it seems that they have been taken in a hurry. It appears that a video had been running on the laptop and this person was able to capture some quick shots of the video being played.

In the past, we have seen black and red as the color for AMD GPUs but it seems that trend is going to change with AMD Radeon RX Vega as these images show a white shroud instead of a black one.

Even though the images are not clear it would seem that there is an integrated backplate as well. Which is something that you expect from enthusiast-grade, premium GPUs.

With the release of the AMD RX 500 series, AMD Radeon RX Vega will allow AMD to have a complete lineup of GPUs to offer the masses.

AMD Radeon RX Vega will also be available to the masses through the cloud much like the Nvidia GeForce Now service. You will need a fast internet connection though.

The anticipation for AMD RX Vega is serious and we are very excited about what AMD has to offer the GPU market. There has been some disruption in the CPU market from AMD’s side and I hope that AMD can also bring some competition in the GPU market as well.

You can check out the images here.

Let us know what you think about AMD Radeon RX Vega and whether or not you are interested in getting the upcoming GPU.