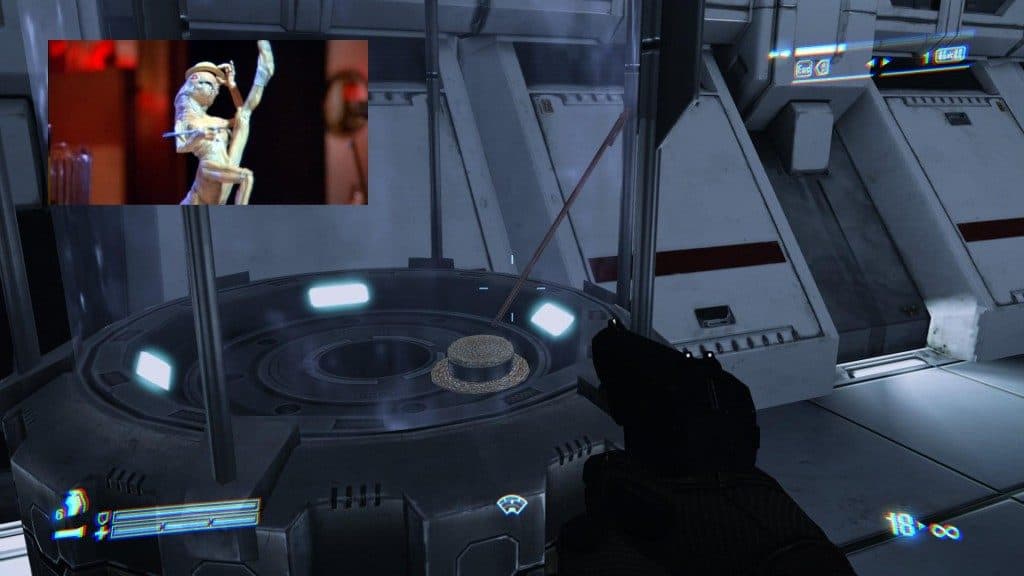 Aliens: Colonial Marines is surprisingly full of discrete Easter Eggs that serve as references to other well-known franchises such as Mel Brooks’ Spaceballs, the Aliens movies and Donuts. We’ve compiled this guide on Easter Eggs that we’ve found so far, and here it is.

Aliens: Colonial Marines Easter Eggs – Spaceballs
Near the end of the movie ‘Spaceballs’ (which is a classic parody of Star Wars by Mel Brooks), there is a scene where the character Kane (played by John Hurt) has a baby alien burst out of his chest. The Alien then produces a top hat and cane and exits the scene while singing “Hello Ma Baby”.

This is referenced in Aliens: Colonial Marines in Mission 7 (One Bullet).

Play the mission as normal until you reach the operating rooms that contain alien specimens in glass containers. Go past the room containing facehugger victims and through the hallway ahead with human soldiers.

Soon you will find a door surrounded in green light so search the hallway for an office with the second audio log for this mission. Do not enter the second room where soldiers will try to activate alarms.

Once you enter the alarm room via this roundabout method you will see a tiny top hat and cane inside one of the glass containers.

In the original Aliens movie, there is a little girl named Newt who says this line at some point; “They mostly come at night… mostly.” As a reference to this classic line, Alien’s Colonial Marines has included a little Easter Egg in Mission 5 (The Raven).

As you’re doing the mission, you’ll come across an area where you will find a new type of enemy – The Boiler – these guys are blind and only react to the sound of your footsteps so you better hold that walk key as you move.

You’ll get to the part where there are a number of petrified (frozen) alien bodies. In this area, there is a switch near a blinking red light that activates some sort of generator that makes a lot of noise and attracts the boilers to come over to it and blow up (clearing the way for you).

Head into the room directly opposite to the generator and right in front of you are a few barrels. You will find the doll head on top of one of the barrels. Interact with it to grab a Trophy for bonus points.

Aliens: Colonial Marines Easter Eggs – Giant Rolling Donut
Gearbox proves exactly how crazy they are with yet another completely bizarre and baffling easter egg You can find this one in Mission 7 (One Bullet).

Play through the mission as normal until you get to the point where the objective changes to “Find a way into the Weyland-Yutani Facility to save Bella”. At this point you and your AI team will exit the building and enter a rocky location with a path that slopes upward and a chasm with lava in it.

As you proceed up the path, keep a sharp eye on the ground on the other side of the chasm to your left. If you’re attentive, you will see a small box of donuts that disappears when you shoot it (it’s rather hard to spot, so keep scanning the ground with a sniper rifle).

Shoot the box of donuts to make it go away, and then stand to the side of the path you are on. Before long, a giant donut will roll down the path and go straight off the side into the lava where it explodes.

Aliens: Colonial Marines Easter Eggs – Space Jockey Hologram Space Battle
In the original Alien movie, our characters come across a derelict ship in which they find the corpse of a large extraterrestrial they called a ‘Space Jockey’.

The space jockey appears in Aliens: Colonial Marines and if you interact with it in a certain way, you get a surprise. During Mission 8 (Rampart) you’ll be exploring the alien ship and will find this creature.

There are a good number of enemies about, so clear out the room first. Once that’s done, take aim at the Space Jockey’s head and unload a clip or two’s worth of bullets into it. Before long two miniature holographic spaceships appear and start to do battle around the room.