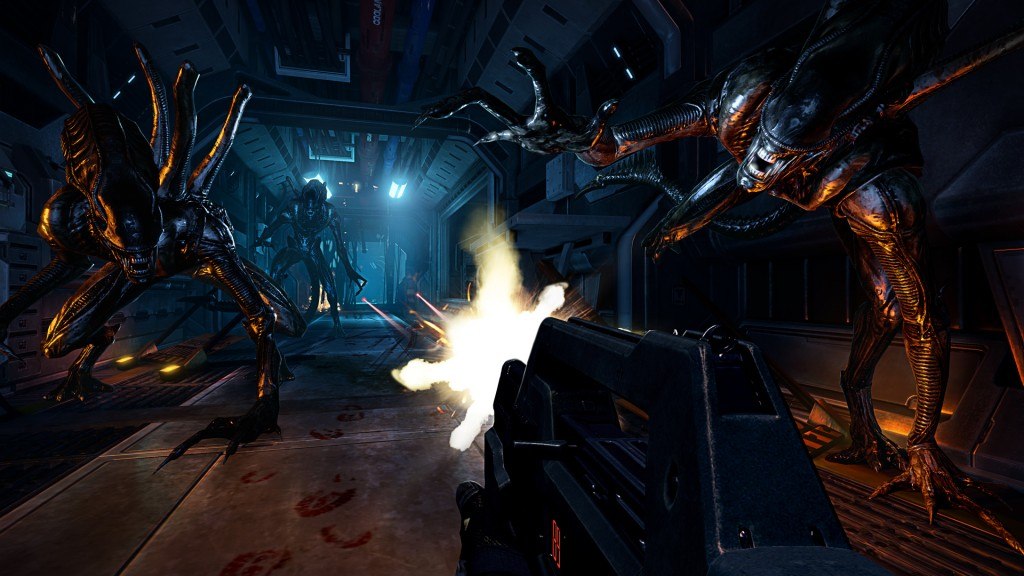 Aliens: Colonial Marines has been released by Gearbox Software. Although the game is not so much different from your typical FPS games; there are several things that make it different from rest of the bunch.

In this guide we hope to cover all such issues in the game, so, that all gamers FPS regulars or not will begin to play the game at the same level. Here is the list of things we will cover in this guide:

So, let’s not waste any more time and start with our first topic.

You will need to find MED-packs to restore your health. The same rule applies to the rest of the bars. The damage you will receive comes in acid form from the Xenos. Firstly, Xeno Spitters can spit acid on you and secondly, if you kill a Xeno at close range his acid blood will splash on you. Be sure to avoid both scenarios.

If you take damage this bar will drain before anything happens to your health bar. However, it does not regenerate like the health bar after taking damage.

Ranks and Upgrades
The ranking system of the game is connected to both the campaign and multiplayer sections of the game. This also goes for the upgrade system found in the game as well. The experience can be earned from killing Xenos, completing challenges and locating collectibles. Once you have enough experience you unlock a new rank which in turn awards you with a Commendation.

These commendations can be used to unlock upgrades for your weapons. However, only those upgrades can unlock with a commendation which are available at that rank. This was the ranking and upgrade systems for the marines.

Xenos are playable in the multiplayer section of the game; they have their own ranks and upgrades. However, their ranking and upgrade system works exactly like the marines’. The level cap for the ranks of both marine and xeno is 60. Moreover, all unlocks for the xenos will become available by level 20 and by level 26 for the marine.

Challenges
Think of challenges as small side mission present in both the campaign and multiplayer section of the game. Keep in mind that some of these challenges are unique to one of the two modes. You can complete these challenges to earn 500XP each and an unlock. There are 86 challenges divided into 3 categories.

Only the challenge at the top of each category will be active for completion. Some of these challenges even unlock traits and armor pieces. In fact, all of the challenges that unlock the good stuff are in category 3.

Marines Tips
The marines are the only playable race in the campaign mode of the game. However, in the all multiplayer modes of the game, you get to play as both parties. You switch species at the ending of each round in any multiplayer type match of the game.

When playing as a marine in the multiplayer section of the game, there is one you and your mates should absolutely do. That is to stick together! Furthermore, it is advised that you mostly use automatic weapons mostly.

You can use a shotgun for close ranged encounters. Moreover, regularly check your motion trackers to see if there are any enemies nearby. Foes are marked by white circles and hollow diamonds is for your allies.

After a particular amount of time you can also awaken Xeno Crusher and Xeno Boiler at particular locations on the map. Xenomorphs have the ability to see through walls. By this they can locate both marines and fellow Xenomorphs.

You and your allies must use this ability to pick off lone marines by flanking them from each side. Furthermore, you can also use the air vents to discretely enter a room even if a marine is guarding the door. Remember, you can perform a fatality and instantly kill a marine if you sneak up behind him.

You can also climb walls and cling to ceilings. These places are ideal to launch an ambush on unsuspecting marines. However, while on walls or ceilings your ability to damage is greatly impaired.