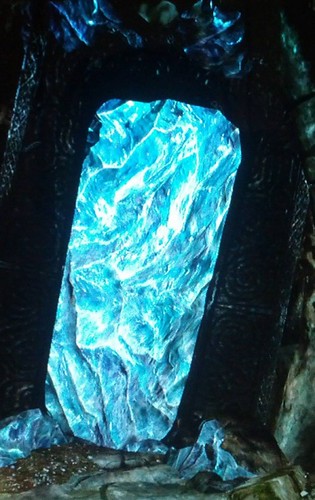 Crafting in the Dragonborn DLC for Skyrim is taken to a new level with the introduction of a new rare metal, Stalhrim. This guide will help you with Skyrim Dragonborn Stalhrim Mining to craft unique items.

The Stalhrim metal requires players to take on certain side quests before having the capability to make usable items from it. Elder Scrolls veterans should instantly recognize this metal from the Bloodmoon expansion for Morrowind.

Stalhrim isn’t your ordinary metal, and because of that there are two problems in obtaining its ores. Firstly, it is found in large blocks of blue crystalline rocks that look like ice.

Secondly, you have to obtain the Nordic Pickaxe, a special weapon that you can mine Stalhrim with. You get this if you complete a sidequest for the Raven Rock Blacksmith, and then indulge in a couple of more sidequests to actually start forging with it.

To Get the Pickaxe
Go to Raven Rock and talk to the local Blacksmith there. You will initiate a quest to find the pickaxe. Once you have obtained it, deliver it to the Blacksmith. Thankfully, he’ll let you keep it. You can start mining for the Stalhrim ore, but you still can’t forge anything with it yet.

Starting Crafting
You need to go to Skaal Village, where an NPC will ask you to rescue their local Blacksmith. Complete the quest and you will be able to forge this material.

You can craft the item from and forge at a Blacksmith shop. You will require high levels (at least the ability to craft Ebony items) in order to forge Stalhrim.

Obtaining Stalhrim
As stated earlier, Stalhrim comes in the form of large blue crystalline rocks, which you need to break with the Nordic Pickaxe.

Some amount of the metal can be found in Raven Rock Mine. Other places that you can find Stalhrim are: