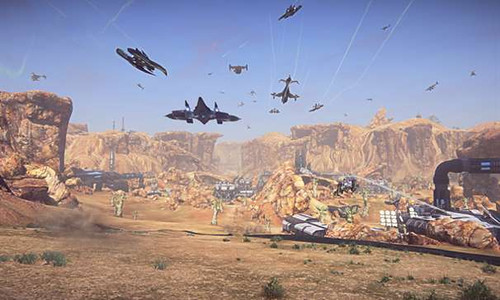 The massive-scaled battles that take place on Auraxis in PlanetSide 2 require fueling and funding, and this comes in the form of Resources. Resources in PlanetSide 2 are your currency for acquiring a variety of different warfare equipment and technology during the battle.

Aside from Certification Points, Resources are the main determiner of financial stability of a faction (and hence its capability to acquire more powerful items).

There are mainly two types of Resources in the game, Certification Points and Building Resources.

Building Resources are spent to create items and/or vehicles at their respective terminals. Whenever a player spawns a vehicle from a Vehicle Terminal, he/she will be simply using the respective resources to create that vehicle. Similarly, if he/she decides to resupply in his/her load-out section, he/she will be consuming a certain amount of Infantry Resources to ‘create’ that resupply, which will then appear in his/her inventory.

The resource cost for the equipment and vehicles that can be purchased from terminals is the same for all factions. Thus, the major portion of the multiplayer revolves around capturing key territories and facilities to keep the supply of resources flowing smoothly.

Earning Resources
Resources are earned generally by periodic region control and by controlling various facilities. The latter tend to be much more rewarding as general region control, and it is thus a good idea to attempt to assault and take hold of facilities (though this is much more difficult than region control).

Each region has a resource type assigned to it, which determines what kind of resource rewards players receive from that region. This region resource can be seen on the map by clicking the compass icon.

Regional control resources are awarded to the respective faction every 5 minutes. When the rewards are given, players receive resources from regions their Empire controls on their current continent that are connected to their Warp Gate by other regions they control. This is called a Supply Line.

A Supply Line is nothing other than a connected route made by the occupied regions for the resources to flow towards you. If a supply line is not established, you will not get the resource rewards associated with that isolated/disconnected region despite having control over it.

These territorial control resources are specific to the continent only, and do not carry over across to the other two continents. If an empire succeeds in capturing all contested territories in a continent, it will receive a bonus. These are:

As far as capturing facilities is concerned, battle rewards are granted to players throughout facility capture events as they accumulate score points, which are based on the experience earned. The type of facility and its location greatly affect what kind of resource points you earn.

For example, if two factions are fighting over a certain facility region, the players will earn experience. That experience is tracked as points, and once the player accumulates enough points a single resource point in a particular resource type will be awarded. This will keep on happening for both sides until the capture of that region is complete.

In addition to normal experience gained by hacking terminals, killing enemies, and other conventional methods during facility capture, players can earn bonus experience by doing some facility-specific roles, such as killing enemy players near capture points, destroying vehicles in the area, re-supplying players within the facility area.

This accumulates together into a relationship between the experience; points earned, and resources rewarded for a facility capture event, given as: