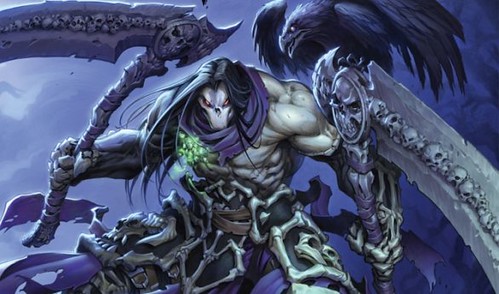 Dungeons usually are the places where you need some brain storming, and these places in Darksiders 2 are no different. Darksiders 2 The Shattered Forge dungeon is a place which you will have to visit especially when you are looking forward to find all “The Book of the Dead” pages.

You’ll also be able to find Valus’ hammer here so it’s worth of spending some time.

Entry Stairs
You’ll find a hidden chest under the stairs right as you enter the Forge. Proceed through the north door after raiding it.

Water Cavern I
You’ll see a chest right as you enter, but ignore it for now. Instead, dive under the water and nab an underwater Boatman Coin, then climb out and move on through the west door.

Water Cavern II
Drop down into the deep water in this cave, and then swim north and dive into an underwater hole. Continue swimming through the watery passage to reach the next area.

Map Cavern
Surface in this cavern and crack open the ornate chest on the low ground to claim the Dungeon Map. Scale the east wall afterward to reach the area above.

Corruption Junction
Eliminate the Savage Prowlers that ambush you in this room. Corruption crystals block the north door, so proceed through the west door instead.

Lower Shattered Passage
Wall-run to the north ledge, leaping between the walls and jumping the corner to extend your run. If you fall, swim south and scale the hand holds to return to the passage entrance. Here, your destination will be a safe shelf.

When you reach the north ledge, stand in the north alcove and leap between the parallel walls to climb up to a higher passage.

Upper Shattered Passage
Head south, wall-running across two pegs. Your path will soon be blocked by corruption crystals. Look to the south and you’ll see a Shadowbomb pod, Deathgrip it to send it into the blockade (yellow crystals), clearing the path.

You may check this area out for Omega Blades, which are basically a legendary secondary weapon.

Before advancing, collect another Shadowbomb and backtrack to the previous passage.

Look for a Corruption crystal down below, and toss the bomb to destroy it. Drop down and investigate the nook you’ve uncovered to discover a unique weapon. Climb out of the passage and proceed east, past the first nest of Crystals you destroyed.

Wall-run across the pegs to reach the east ledge and a Shadowbomb pod. Use the bomb to destroy the Corruption crystals below, and then drop down and slay the Savage Stalker who ambushes you. Proceed through the north door afterward.

Construct Ambush
You’ll find two chests in this small chamber, where Death becomes trapped and is forced to battle several waves of Construct Warriors and Champions. Fight hard to slay them all and earn your freedom. Wall-run through the narrow east passage that follows to reach the next area.

Locked Door Chamber
Pay no attention to the hand holds in this room and dive directly into its central pool. Go to the southwest hole, and keep swimming into the underwater passage. Surface at the passage’s far end and scale the wall to work your way up to the room’s second floor.

Locked Door Chamber—Upper Ledges
You’ll come out near a Shadowbomb pod. Throw it at the east ledge’s Corruption crystals, then grab another bomb and drop to the chamber’s main floor. Hurl the bomb at the crystals on the northwest ledge to clear it off as well.

Use the room’s hand holds to climb up to the northwest ledge. Raid its chest and wall-run around the room, going north and then looping around to the south to reach the east ledge. Proceed through the east door.

Sentinel Ambush
You’ll find a chest by wall running along the room’s outer wall towards its northeast corner. You’ll be trapped there and have to fight a bunch of Tainted Construct Warriors, a Construct Champion, and a Construct Sentinel.

Focus your fire towards the Construct Sentinel. Here, you will need to use the Redemption pistol with manual aiming. Once you’ve taken care of the Sentinel, then you may proceed with getting rid of the Tainted Construct Warriors.

Kill one of the warriors to make the sentinel drop his defenses, then go nuts on it to take him out of the fight quickly. In the end, you’ll have to face the Construct Champion.

After the fight, break all the vases in the room’s northwest corner and find a Book of the Dead Page. Proceed through the west door afterward to return to the previous area.

Going Back To Upper Ledges
You emerge on a ledge with an ornate chest that contains a Skeleton Key. Push the nearby switch to drop the ledge’s gate, and then drop to the chamber’s main floor. Open the locked south door and go through.

Going Back To ter Cavern I
You’ve come full circle, finding yourself back in the chamber with the tantalizing chest. Simply cross the walkway and open the chest to obtain Splinter-Bone—the prized hammer that Valus lost long ago.

You’ve nothing more to accomplish here at the Shattered Forge, so find your way back to Tri-Stone. Return Valus’s precious hammer and claim your reward.

You don’t have to worry about not obtaining the reward, since the Splinter Bone is a part of The Hammer’s Forge side quest and if you haven’t unlocked it, it will eventually appear in your quests.