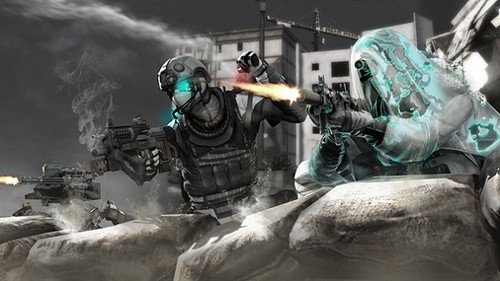 Ghost Recon Future Soldier multiplayer is truly unique when it comes to multiplayer in the franchise, giving players much more freedom in terms of class based warfare than before.

Multiplayer of the game is traditionally kept in two forms i.e the co-op campaign, and the competitive arena where players fight with each other in different game types.

If you are new to the series and don’t know how the multiplayer of most tactical shooters work, then you may well be seeking some guidance. This multiplayer guide will focus on the important elements of the mutliplayer that can help you survive in the battle. Let’s start with the basics first:

Ghost Recon Future Soldier is primarily a third-person shooter, but it will switch to the single player if a weapon is aimed down sight. First thing you need to know about is the cover system of the game. If you have played the single player campaign, then you must have some idea how it works.

You can go to cover behind a feasible solid support and since the object behind which you are trying to provide yourself cover with can be destroyed, you may have to shift from one place to another depending on the need.

To move from one cover to another, you need to place your reticle to the next spot, and you will follow the prescribed path to that cover. The path followed will be shown before you move to that spot.

Against AI, followed path won’t be an issue, but if you are against human players, you will have to consider it as you can be shot easily while moving from cover to cover.

Your HUD will let you know what’s going on around you. The red circle symbol will warn you about the enemy shooting at you. This only means that you are under fire, and if you are hit, the scree will start turning red. The difference is important as players tend to leave a safe spot thinking that they are being hit.

In the same way, if you are detected by an enemy, a message will pop-up telling you that you are in enemy’s sight. A short screen at your right side will also show you the way your cover was blown. You can use these things to devise your defensive or offensive move in response.

If everything around you goes off black except an EMP marker, then you are being affected by the field. The purpose of EMP is to interfere with the normal navigation, and the darkness around you will serve the purpose for some time.

Weapons in Future Soldier can be used in different ways as there are plenty of customization options available for each weapon.

There are even different fire modes (Fully automatic, Semi-automatic, burst fire and single shot) a player can choose for a particular weapon. Burst mode goes well for accurate long-range shooting while for close quarter combat, fully-automatic or semi-automatic modes usually are more effective.

While you are customizing your load out, you may get confused that which attachment is better for your weapon. The simpler solution is that you choose the optimize button to get the setup with best stats.

You can also make use of the Gunsmith mode to try out your weapons in the given training area.

Intel is one crucial element in Future Soldier’s multiplayer. If you want to find an enemy position for yourself and your team, you are going to need Intel.

Camera, Heartbeat Sensor, OTR Scanners and UAV are some Intel Equipments that can be used to find out enemy’s location on the map. Different levels of Intel will let you spot enemies in different ways, e.g. Level 2 Intel will mark enemy as red that is right in front of you.

If you are looking for Intel on the entire team, you will have to do it through data hacking. For Data Hacking, you need to stun an opponent (make sure that enemy is not killed) and then use the system to acquire data on the whole team.

This will mark enemy positions on the map not only for you but for your whole squad. It’s a risky task as you can easily be picked up by other opponent players while hacking, but the reward is good enough to bear the risk, Isn’t it?

Teamwork my friends, can easily be the difference between the winning and the losing team. You can make use of the Coordination system in the game to mark different locations for your teammates instead of shouting in microphone and still not able to convey the message.

Now that we are done with the basics, let’s have a look at the various game modes in Future Soldier.

There are four game types currently available in Future Soldier; Conflict, Decoy Mode, Saboteur and Siege. Each of these modes have different settings and objectives. Let’s go with the “Conflict” first.

Conflict
In conflict mode, the two teams fight over different objectives appearing randomly throughout the map. If one team gets hold of the object i.e capture it, the other will have to destroy it in the given time. Each successfully captured and defended objective will give 100 points to the respective team.

There are also some bonus points like if you kill someone who in the middle of capturing an objective, your team will be awarded with +1. The match will continue for 15 minutes and the team with most points at the end will be victorious. The objectives you can come across in the Conflict mode are as follows:

Inter Sweep – You will have to capture an Intel sensor for Intel Sweep on the opposite team. After the capture is complete, your team will have to defend it for the given time.

Supply Point – For this objective, teams will have to capture Supply Point, which happens to be the ammo resupply. After it is captured, your team will need to defend it until the clock runs out.

EMP Blast – If a team has captured the objective, the other team’s task will be to blow it out with a C4 charge. Either team will get the points if they succeed in their respective objectives.

HVT – One of the team members will be marked as HVT (high-value target value target) which the opposite team needs to kill. The team with the HVT, however, needs to hack the Intel Sweep from the other team and defend it for a particular time to get the points. So, both the teams will have something to defend as well as attack.

Decoy Mode
The decoy mode is somewhat twisted. The match is divided into three rounds with the respective objectives. Two of these objectives are fake. Which ones? No one can know.

The game will continue until the real objective is revealed. After the reveal of the true objective, the final objective will be revealed.

After each round (10 minutes), teams will switch roles between attack and defense while the factions will remain same. Attackers will need to complete all the objectives to win defenders will have to defend for 10 minutes to mark their victory.

Saboteur
In this mode, each team will try to destroy the base of the opponent using a bomb. There is only one bomb so it will have to be captured first and then taken to the enemy base. The bomb carrier, however, won’t be capable of running, and he will only be able to use his secondary weapons.

If no team can detonate the bomb in the opposition’s base after 10 minutes, the team with more Teamwork points will be considered as the winners.

Siege
It’s a regular defend and attack game with a small twist. One team will be defending the objective while other will try to destroy. In the meanwhile, if any of the team is eliminated completely, the match will be over. There will be no respawans and each kill will give 750 points than the regular 75.

Weapons and various gadgets available in the game are quite diverse. There are almost 50 weapons to choose from and then the customization gives you many other options. Each load out will let you select one primary weapon, a secondary weapon, a grenade and a piece of equipment.

All the customization can be undone by using the Respec Token which you get at level 4 and level 50. If you are looking for detailed information on these weapons, attachments and equipment, read our guide.

Rank progression system in Future Soldier is quite straight forward. As you play the game, you will earn points at each level upgrade, which can be spent to unlock weapons and various gadgets. Each level itself will unlock some of the items for you.

If you want to get everything unlocked, you will have to reach the maximum level i.e 50. Follow the link for more information on the Rank progression system in the game.

In Future Soldier, there are 3 classes to choose from; Engineer, Rifleman and Scout. Each of these classes can use specific weapons and gadgets and have a unique ability. You can use the weapons if you find them during the match. For more detailed information on classes, read our guide.

Found something missing? Contribute by commenting below!