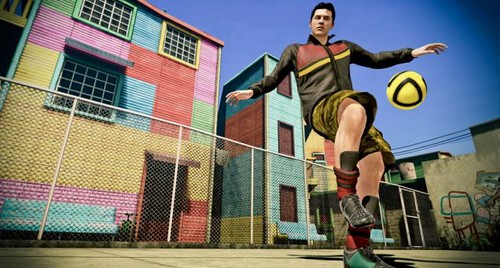 Regardless of your choice, you will need Skills, Moves and a combination of these two to execute breath-taking combos if you want to win in FIFA Street so read our handy FIFA Street Skills guide to aid you.

If the tutorial doesn’t help, you can read our tips to learn more about these tricks and how you can execute them perfectly, and more importantly, when you should execute them.

Street Ball Control is a very fundamental step which you must learn to perform other skills or signature moves of the game.

Street Ball Control is basically a different style of movement in which you gain the control of the ball in a more proper and a defensive way.

You will have to specialize in it at all costs as only then you will have the ability to perform the skills, it’s very easy.

Ball Control
If you quickly release and hold the (LT – left trigger) button then your player will quickly move into the direction of your left stick.

Pannas
Pannas are also performed with the help of the Street Ball Control (Hold LT, aim your LS towards the defender, release LT while pressing RT)

In real-life you may know Street Ball Control as Ground Moves, which enhance the control on the ball and lead to further skills.

You must practice the basic tricks before you move onto the harder ones.

Step Over
The typical step-overs which confuse your opponents with the direction you’re heading to.

Body Feint
In this skill, you’ll simply body dodge your opponent, so he blocks the other way, and you pass him through the other direction.

Roulette
Just when the defender is trying to tackle, you can spin past your opponent and change the direction quickly to go cross him.

Rainbow
This is a special skill move which is added into Fifa Street and has a couple of variations as well.

Flip Flap
Dodge the defender and send him the other way by changing your direction quickly. Ronaldinho did this often.

Stand Ball
This is a pretty un-realistic move but effective in the game.

One of the most dashing skills is the Panna (also known as nutmeg) and is a FIFA Street skill move. You can follow our tips to not-only execute it perfectly, but also defend this move.

Panna
Panna is a skill in which you dodge the defender and go past him by passing the ball through his legs. Simply use the Street Ball control by pointing the left stick to the direction of the defender’s legs and holding the right trigger so you can move. Release the left trigger to continue further.

How To Defend Panna: If you have your legs opened, then you are a victim of the Panna which can be stopped by holding the left trigger as the ball gets closer.

Air Beat
The Air Beat is not very hard to practice, simply tap the right bumper and juggle the ball. Now move the left stick towards the direction you want to move to, if it’s the direction of the defender, then your player will chip the ball above his head and move on.

Now that you have mastered the basic tricks of the trade, let’s move on to the Combos:

The basic skill moves are enough to cross a defender, but if you want to see some real action, then you must build up a combo.

These combos are difficult to perform and also earn you up to 275 style points if you trigger them well. Some of them are simply performing another skill onto a skill.

Note: Some combos require you to be a player of level 35 or above to unlock them.

Fake Back to SmackDown (50 point)
Hold the RightStick backwards and then press the RB/R1.

AirRoulette (175 points)
Tap RB and rotate RS back to front.

Have something to add to this guide? Comment away!