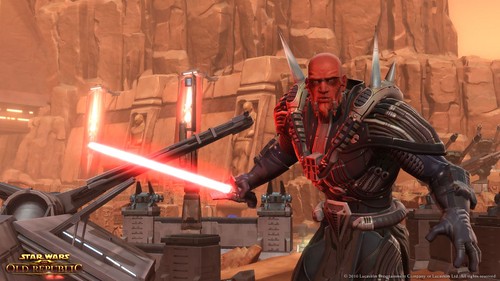 I’ll be explaining the specializations of the Sith Juggernaut in this guide, focusing on the Skill Tree and builds. For more help on Star Wars: The Old Republic, read our Respec Guide, Companions and Matrix Cubes Guide.

The skill tree in SWTOR is distributed into three categories, specializations, or simply trees. The first two categories or trees are specific or exclusive for the character class type. For example, for the Sith Assassin, the trees exclusive to the Assassin are Darkness and Deception.

The third specialization is shared among the parent class’s specializations, that is, it is not exclusive to the character class type at hand, but is available for another class as well.

In the guides here, the point distribution among the specializations is depicted as (XX,XX,XX), where the ‘XX’ is the number of points, and the commas separate the three specializations

For example, if I made a Darkness Sith Assassin build, I would opt for configurations like (31,0,10) or similar, where 31 points are for Darkness, 0 for Deception, and finaly 10 for Madness. A maximum of 41 points are available at level 50.

Now, let’s have a look at how you can tweak your character to your needs, and specialize in a given desired category for specific roles in the game.

The Juggernaut has the following specializations/categories:

Recommended PvP/PvE Build – (33,8,0)
The above recommended build is THE build for the Immortal Juggernaut, which is one of the most powerful tanking specializations in the game. The priority list enhances the chance of survivability of an otherwise hard to take-down character.

The key is to make sure you survive first, and then generate your threat, and finally attempt to good amount of damage. Remember, as a tank you are supposed to force enemies to target you – make it your first priority.

You might want to consider adding an extra point into Invincible, which you will be using a lot as a tank. However, it can be a little tough to choose which skill to deduct points from – choose under circumstances and wisely.

Go to next page for builds on the remaining advanced classes.

On this page you will find suggested builds and rotations for Vengeance and Rage Juggernaut. If you want to contribute any build, suggest it in the comments below

Recommended PvP/PvE Builds – (4,32,5), (5,31,5)
There is little difference between the two mentioned builds, except for a few points here and there. Do not that the Vengeance Juggernaut is a more DPS oriented character as compared to its tanky Immortal counterpart. Shatter is definitely your highest hitting ability, but don’t overuse it.

In fact, it is essential to follow the proper rotation to maximize the damage. Remember, you are a DPS, your role is to do as much damage as possible without taking too much of it yourself. You can try and switch around points from Pool Hatred or Deadly Reprisal to some of the more important and unattended skills.

Deadly Reprisal has its benefit of giving extra Rage, which is never bad, and Pool Hatred can really increase your damage when under CC.

Recommended PvE/PvP Build – (5,5,31)
It’s actually best to build a hybrid Rage/Vengeance or Simply Vengeance Juggernaut for optimum performance. The Vengeance tree is too good for DPS variants to be ignored.

When it comes to PvP, this is definitely the best build as a Juggernaut DPS. For PvE games, you might want to consider the Vengeance specialization instead. Remember to try for the ideal situation, which is explained below:

Firstly you want to select your target, use Enrage for extra damage boost, then Force Crush, then you use Ravage if required. You can also use Force Grip if the enemy tries to run away.

Force push will allow you to startle the enemy, after which you can Charge to the opponent and Stun them, closing the gap point yourself and him/her. After that, simply use Smash and ultimately Force Scream.

This rotation described above will allow you to absolutely annihilate or at least cripple an enemy, provided you land it successfully. Of course, it’s easier said than done, but that is what will differentiate between a normal player and a brilliant one.

Don’t forget to share your own Skill Builds and Rotation Recommendations in the comments below!