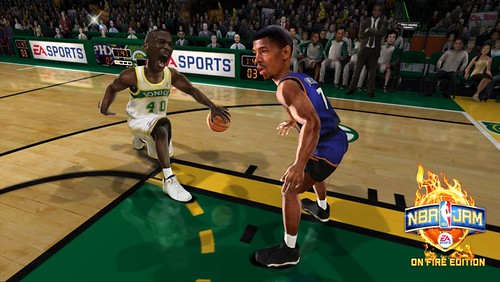 Unlockables have become an essential part of sports games, and they’re a very defined and distinct part of NBA Jam: On Fire Edition. There is plenty to unlock in the game, and one key method of doing so – through sufficient Jam bucks.

But before we start discussing ways to earn Jam bucks, let’s have a look at what can actually be unlocked.

Legendary Players
There are over 40 ‘Legendary Players’ that can be unlocked. Every team has at least one of them. Every team with a Mascot will have one in the game. Additionally, there are special characters for every team to make them represent-able online.

Secret Teams
More than 25 secret teams are included in the game. From teams made up of the best of best NBA players to make-shift teams made of EA’s own folks, there is just about everything. You can expect to find Divisional Mascot teams, Beastie Boys, Stickmen, Honey Badgers, and the NBA Street crew.

Tiles, Backgrounds and Icons
Aesthetic goodies are fun to collect, and there is an ample amount of them in NBA Jam: OFE. You can unlock these to add more customization options for your Jam Card to fit your style and personality.

Privileges
Playing by convention is great, but often people desire to have fun in a world of their own. This is where custom rule-sets for games come in. In NBA Jam, you can unlock the ability to customize your game experience however you want, with variables like visual filters, custom balls and many more.

The key to getting the above is JAM Bucks, which can be obtained in various ways in the game. Complete a game itself gives you these. Here’s a few tips EA suggests you should follow to maximize your JAM earnings:

Also, make sure you think before you spend JAM Bucks – explore the JAM Store and decide what you want and don’t want, and then set out to earn some JAM money. Most importantly, have fun and be a sportsman!