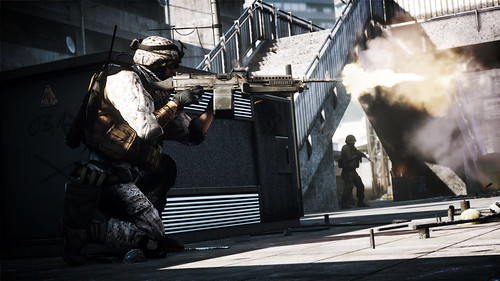 Sexy graphics, intense gameplay, tons of promises; what more does Battlefield 3 need to be resplendently attractive?

Perhaps the answer to that would be multiplayer awesomeness. One that takes all the great aspects of its predecessor, Bad Company 2 and stirs some new clever goodies with it. Well, that’s definitely been taken care of, as the Battleblog has given plentiful details about the multiplayer and the modes of this already-loved shooter.

There will be upto 9 maps in Battlefield 3, and each mode will be playable on tweaked version of each of these. Favorite modes such as Rush and Conquest return, accompanied by intense and exciting deathmatch modes that’ll offer smaller yet denser skirmishes.

Let’s have a look at each mode individually with their respective aspects:

This is the iconic mode of the Battlefield series, and focuses on the core content of the series: dynamic squad vs. squad confrontation in massive maps with a relatively long time-span. If you’ve been a regular Battlefield guy or gal, this mode would need no introduction or explanation. For the newcomers: the mode pits two large squads (with up to 32 players per team!) against each other in a vast area with several bases that have to be captured and held. The more bases you have under your flag, the faster the opposing team’s respawn tickets decline. When one team runs out, the other team wins.

This mode, combined with its smaller brother Squad Rush, is what made Bad Company’s multiplayer so desirable and reputable. The Rush mode has attackers trying to arm explosives on M-Com stations of the defenders to move forward in the map.

It works in the same fashion as in Bad Company, but this time around you won’t be able to destroy M-Com stations by bringing down the building it is situated in. You can’t even shoot the M-Com from a tank or chopper, but instead will have to manually walk and plant the explosives to get accomplishment.

M-Com stations being diffused will have their ticker stopped, so you don’t have to worry about being blown away while trying to diffuse the bombs as a defender (unless it’s from enemy tank shells or jet missiles).

This greatly balances out things, as Rush mode became heavily map dependant in Bad Company 2, particularly for success while defending; some maps were simply too hard to defend while others were too difficult to infiltrate.

The Rush mode’s vehicles will depend on the map being played. Larger maps will give you the liberty to select jet fighters and choppers. Good luck trying to get into one before anyone else.

This is the miniaturized version of Rush. Squad Rush mode will be the smallest and most intensely focused of all the Battlefield 3 game modes. The objective will be pretty much the same; destroy all M-COM stations or deplete the attacker’s re-spawn tickets. However, the subtraction of just one player for the measly 4-man squad will turn the tides intensely, so expect an unpredictable, fast-paced and action-packed experience when playing this mode.

Players: 24 (12 vs. 12)
Focus: Team Based Infantry Combat
Goal: Eliminate a set number of enemy combatants
Winning the game: The team that reaches the set kill number first is declared the winner

Team Deathmatch is a classic first-person shooter multiplayer mode, and needs no introduction. If you’re desiring 15 minutes of intense fun and nothing but killing, this mode will fulfill your thirst. The 24-player mode will take place on smaller versions of the nine maps of the game, and there will be no vehicles.

Players: 16 (4 squads of 4)
Focus: Squad Based Infantry Combat
Goal: Eliminate a set number of enemy combatants
Winning the game: The squad that reaches the set kill number first is declared the winner

There is little difference between Squad Deathmatch and Team Deathmatch, except for the limit on number of players, and the inclusion of vehicles. Yes, Squad Deathmatch mode will have Infantry Fighting Vehicles, which are small vehicles with anti-infantry weapons. You can expect the entire mode to revolve around the destruction and survival of these vehicles. Engineers will definitely play a vital role in maintaining vehicles of their squad and/or destroying opponent vehicles.

Additionally, you’ll be able to play all nine maps on hardcore mode. Hardcore modes will remove majority of the UI and will greatly reduce the health of all players. There is also an Infantry Only option, which will remove vehicles from all the maps, meaning tedious long walks to your destinations with little or no heavy firepower to accompany you.

Expect a busy end of October and November once Battlefield 3 comes out on October 25th.