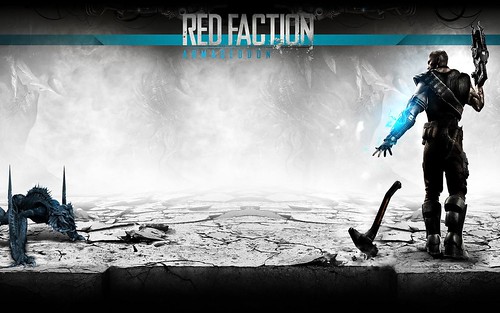 Again, ATI users may be on the receiving end of the performance issues more compared to nVidia users. Red Faction: Armageddon also have troubles rendering the game in DirectX 10/DirectX 11.

You can read the workarounds to fix all your performance issues, random crashes, and other recurring issues that you may come across while playing the game.

1# Red Faction: Armageddon Crash to Desktop
If your game instantly crashes to desktop at launch then you should run the game in compatibility mode with Windows Vista SP2 or XP SP3.

2# Red Faction: Armageddon nVidia/ATI Performance Fix
Those of you who are trying to run the game may end up on receiving end of some serious performance issues as the game doesn’t really makes the best use of DirectX 11. Infact, some of you may experience low performance due to that, quickfix for now is to run the game in DirectX 9.

If you are have nVidia graphics card, you should probably use WHQL 275.33 drivers for the best performance. While for ATI, you can download these ATI Hotfix drivers to resolve your performance issues.

3# Red Faction: Armageddon Sound Fix
If you are experience no sound or very low sound, you can set the your sound options in your sound manager to stereo instead of 2.1/5.1/7.1 sound output to fix the sound issues with the game.

4# Red Faction: Armageddon Corrupted Save Fix
If you are not saving the game manually, make sure you do since if the game crashes, all of your autosaves will be corrupted and you may no longer be able to continue your game.

6# Red Faction: Armageddon – The version of this file is not compatible with the version of windows you are running.
If you bought the game off Steam and are trying to run the game while the game is not unlocked in your region, you will encounter this error. Best wait for the game to unlock for your region.

7# Red Faction Series – Fixes
If you pre-order the game and got the first and second Red Faction as part of the pre-order gifts, you will need to optimize them to run on your system. They are old games which may crash if you attempt to run them on your high-end new OS system.

Go to Start > Run in Windows and type msconfig.
Click on the Boot tab and choose Advanced Options.
Check the Maximum Memory box and change the setting to 2048.
Click OK here and in the remaining menu.
Restart your computer and play the game.

8# Red Faction: Armageddon Crashes With DirectX 9
If the game crashes even when you switch to DirectX 9, make sure you have correctly installed the game on Steam. Try verifying the integrity of the game cache.

9# Crashes to desktop during ‘system initializing’ loading screen
Verify the integrity of the game files if you downloaded the game from Steam. Most probably this error occurs due to some missing files.

10# High Screen Resolution Problem
If you are trying to run in the game on High Resolution with DirectX 11 rendering the graphics. You may experience the resolution minimizing automatically, the problem is with DirectX, and as suggested above, you should play the game in DirectX 9 to resolve these issues for now.
If you face any other issue, let me know and I will try to help you out.

11# Crash at Cut-Scenes
First, verify the integrity of the game files to see if you have every file the game needs to run properly. Second, try setting the sound to stereo from surround sound 5.1/7.1 and see if that helps.

12# Opening GUI Freezes – Red Faction Armageddon
If you are experiences random freezing on opening GUI, you should disable SLI or Crossfire and run the game on single GPU.

13# Low Performance on High-End Machine
If you are experiencing low performance on high-end machine, you can try to run the game in DirectX 9 and secondly disable Vsync to make things a bit smoother. Disable the SLI or Cross and try running the game on single GPU.

14# Xbox 360 Controller Not Working
Make sure you don’t have any other USB controller connect to your PC or it may be getting detected as a controller. Unplug every USB device from your PC and then connect your Xbox 360 controller.

If you come across any other issue, let me know and I will try to help you out.