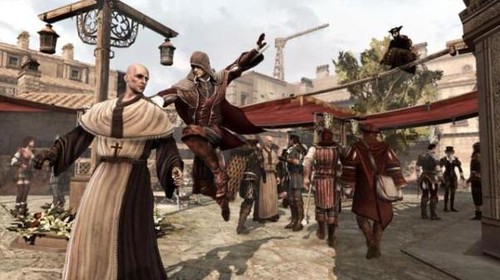 Assassins Creed Brotherhood has finally been released on PC with all the multiplayer goodness.

The game for the first time will ship without the most-hated DRM in the history of video games. If you are still among the unlucky few experiencing any of these issues, you can resolve them by following the workarounds given in our troubleshooting guide.

6# Assassin’s Creed Brotherhood No Dialogue/Cut Scenes While Playing – No Sound Fix
In case you have Realtek sound card on board, you may experience disappearance of sound while playing the game. In that case try uninstalling the sound drivers and running the game on default sound drivers, see if you the sound comes back if it doesn’t try updating your sound card drivers.

7# Unable to Access Internet Please Verify Your Connection – Connection Issues Fix
“An Internet connection is required to play this game. Failed to connect to the Ubisoft master servers. Please verify that your Internet connection is functional and try again“. Even when you are connected to Internet. Make sure your anti virus or firewall is not blocking the game executable if you are experiencing this issue. Also make sure you aren’t behind a proxy.

One of the reasons this may happen is that you may be connected to internet via a proxy server. Ubisoft game launcher uses Windows proxy settings for http proxy so some configurations can cause problems. So if you are connecting to the internet via proxy you may try following suggestions:

Open “settings.ini” and add the following snippet at the very end:

Now change the “proxyhostname” and “proxyport” to the ones you are using and save the file.

In case you don’t know which proxy host and port you are using for connecting to the internet, you can find it by:

Open internet explorer>tools>internet options> click on the “connections tab” and then click on “LAN settings”. You will find proxyname and all the port information in this window.

8# Assassins Creed Brotherhood Error “Plz Wait Until Saved Games are Synchronized from Server”
In order to bypass this you will need to disable the saves online and delete the storage folder. Here is how you can do that:

10# Assassins Creed Brotherhood Bonus Codes Not Working
Ubisoft said there was some problem at their end which resulted in these bonus codes not working but now that it has been resolved, you should be able to redeem your bonus items from Uplay.

11# PunkBuster kicked player ‘username’ (for 0 minutes) … This PB Server Requires (A1379 C2.261) – Error loading pbag
The usual fix would have been to install punkbuster manaully but since the manual version doesn’t allow you to add Assassins Creed Brotherhood, you are out of luck. Remove Punkbuster from your system, back up save files, and uninstall Assassins Creed Brotherhood. Do a fresh install and see how it goes.

12# Assassins Creed Brotherhood ‘This game session is unreachable’
It has something to do with the game servers messed up, so be patient while Ubisoft resolves issues at their end.

13# Assassins Creed Brotherhood – Can’t Continue a Memory
If you are stuck at some memory, being unable to continue from there. It is advised to use a different route to complete the game as it well be a random bug.

16# Disconnected From Multiplayer
If that happens it means servers are overloaded, be patient, it will be resolved soon since the same happened with console players.

If you encounter any other problems or errors or know any other possible solutions to these issues in question, don’t hesitate to comment.